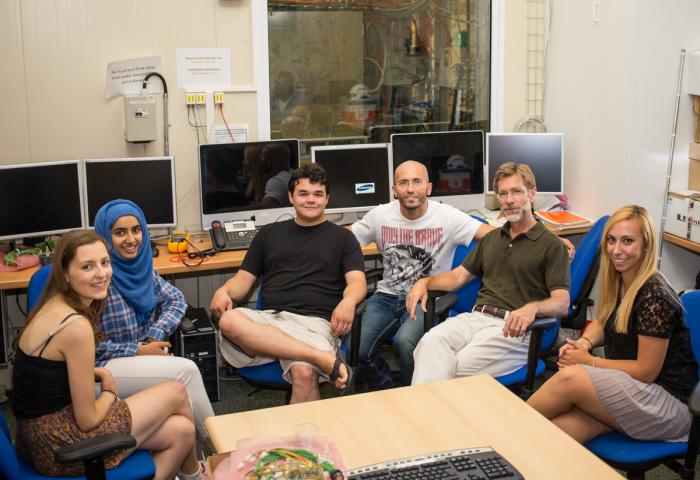 Our group recently completed a long and successful program at Fermilab as part of the CDF Collaboration. That research program capitalized on the discovery of the  top quark with subsequent measurements of its mass, a search for new objects that would decay into pairs of top quarks, and a search for rare flavor-changing neutral current decays of the top.  We also performed a test for new physics in the kinematics of top decay products and a search for a charged Higgs in top decays.  The culmination of our program at CDF included the first evidence for photons produced with top quarks and the strongest evidence from the Tevatron for a new Higgs-like particle at 125 GeV that was discovered at the LHC.

Yale joined ATLAS  in 2003, Tipton joined in 2006.  Our hardware focus has been on the  Transition Radiation Tracker, or TRT  for which we have played an important role in TRT operations. We are also preparing for upgrades to the ATLAS tracker for a future high-luminosity era referred to as  HL-LHC.

One of the strengths of the ATLAS detector is that it is a general-purpose device, making it an excellent facility with which to search for phenomenon beyond the Standard Model of particle physics.  We first helped establish that ATLAS was physics-ready by making important contributions to the group effort that made the first measurement of the top cross section using the ATLAS detector.

Once ATLAS was commissioned and physics-ready, we focused our attention on a search for leptoquarks, a hypothetical new phenomenon for which the production at the LHC would quickly eclipse that of the Tevatron.   We worked with two other groups to set new limits on first and second-generation leptoquark production.  Next we performed a broad search for new exotic phenomenon that would give rise to events with three or more high energy leptons.   We contributed to the second generation of this analysis which was led by LBNL and NYU. Jointly with Prof. Golling, we are developing a charm-quark displaced-vertex tagging algorithm to apply to a low-mass SUSY stop-quark search to a low-mass SUSY stop-quark search.  We are also using displaced-vertex tagging to search for top events with additional charm or bottom quarks.  This is an important background to a likely ttH signal.

After the discovery of  a Higgs-like object, the most important task for the LHC is to determine the properties of this object.   Is it a Standard Model Higgs?  The production of  the Higgs and subsequent decay to two photons both proceed via processes that have virtual top quarks in an intermediate state.  Any new massive object that couples to gluons and photons would also contribute and very likely alter Higgs production and decay rates.  By comparing the rate of Higgs final states,  including Higgs production in association with pairs of top quarks, one can probe new phenomenon at a very high mass scale.  We are conducting a search in our current data samples for events consistent with the ttH final state, while also preparing a future ttH analysis for LHC running after 2013.